Skip to content
View basket “Trailblazing Women of the Georgian Era” has been added to your basket.

A fascinating illustrated and annotated transcript of John Newton’s diary for 1764, which has never been published before. 1764 is the year Newton left Liverpool to enter ordained ministry in the market town of Olney.

A4 booklet of 40 pages plus cover.

John Newton was certainly one of the most influential of the 18th century evangelical leaders, in and beyond the Church of England.  Arguably, he was the greatest ‘all rounder’, but he especially shone in his pastoral ministry, whether by letter or ‘one-to-one’.

Newton’s diary for 1764 reveals the heart of this already humble and godly man as he traced the course of his move into fulltime ministry in the Church of England.  When he was approached with the possibility of ministry at St Peter and St Paul, Olney (officially, he became curate to the absent Moses Browne), he wrote ‘I cleave to the steadfast, faithful promise of my God which abideth for ever.  I cast my all upon Jesus, and plead His righteousness and strength’ (4 March).

True 18th-century spirituality could perhaps be too introspective.  But essentially this diary is the honest record of God’s dealings with, and leading of, one who had been rescued for the Kingdom of the Lord Jesus Christ.

I have longed, for many years, to see Newton’s diaries in print, and here are the first fruits, with Marylynn’s (Rouse) remarkable footnotes and photographs.  It is no exaggeration to say Marylynn knows more about Newton than anyone else on the face of the planet, and she freely shares her knowledge with scholars and writers across the world.  Marylynn’s work through the JNP (John Newton Project) deserves wholehearted and prayerful support.  Newton’s significance is undiminished.

Transcribed and edited by Marylynn Rouse of The John Newton Project  www.johnnewton.org 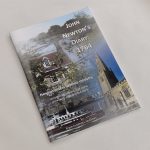