Visit the Museum Gardens of the eighteenth-century poet, William Cowper, a passionate gardener living at a time when seeds and plants were arriving from North America. From his letters and poems, many of which were written here at Orchard Side, we know many of the plants he grew. He said of himself:

‘Gardening was of all employments that in which I succeeded best.’

He even grew pineapples in the museum garden, having received from the gardener at Gayhurst House, ‘six fruiting pines’. He grew these on a hotbed of manure and earth, covered by a ‘light’ or cold frame which he made himself. We do not know the layout of his original garden, other than he had ‘a gravel walk thirty yards long’. But we do know that he built himself a greenhouse to over-winter his evergreens, particularly the myrtles, of which he was particularly fond.  In the summer months, he seems to have used it as a conservatory, as we would today.

‘I began with lettuces, and went onto cauliflowers, cucumbers and melons.’

All visitors to the Museum enjoy the sensory pleasures of these two peaceful and tranquil gardens, with their abundant flowers, fruit and vegetables.

In 1994 the Trustees were awarded a grant from the Carnegie Trust to redesign the flower garden and the decision was taken at that time to have only plants in it which had been introduced to this country before 1800, the year of the poet’s death. Of course, this included all the native flowers and herbs introduced by the Romans, as well as plants introduced by successive incomers or explorers, often sponsored by the nobility. This provides a wide variety of plants in the flower garden.

Entry to the Summer House Garden is through the gate in the corner of the Flower Garden. The Summer House Garden originally belonged to the apothecary, Thomas Asprey, who lived next door to Orchard Side. After Thomas Aspray’s death, Cowper was allowed the use of this former medicinal and herbal garden. Selected friends were allowed to visit him in the unique building in the centre of the garden, which he described as his ‘verse manufacturey’.

To help re-create the original use of the garden, a bed of medicinal plants and a long herb border have been created. Today this garden is laid out like a Victorian Kitchen Garden with heritage fruit and vegetables, as well as modern varieties (there being no date-line in this garden).

Cowper spent much time alone, reading and writing, in the Summer House, as ‘a refuge from all intrusion’, ‘in which to invoke his Muse’, hearing only birdsong from the trees. He invited only his closest friends into his ‘verse manufactory’. Writing to William Unwin, Cowper described the Summerhouse as ‘a nook… not much bigger than a sedan-chair’, and the garden around it as ‘crowded with pinks, roses, and honey-suckles’. He teased Lady Hesketh that they would be ‘as close packed as two wax figures in an old-fashioned picture frame’ when she visited him there. After Cowper’s death in 1800, the Summer House became a shrine to literary pilgrims, who signed their names on the building’s interior walls – something we don’t encourage today …

The Summer House itself is a Grade 2* listed building.

The Buckinghamshire Garden Trust carried out an investigation of the gardens and the findings are on the www.bucksgardenstrust.org.uk website, along with reports on other nearby historic gardens

Upkeep of the Museum Gardens 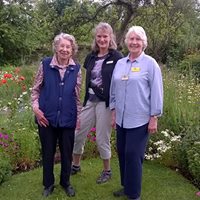 The Summer House Garden has always been tenanted out and Charles Knight took the garden over twenty-five years ago.

The Flower Garden is maintained by a small group of volunteers and is self-funding from the sale of plants, flowers and surplus vegetables in season.  Between them, they have raised the standard of the gardens and have been opening for over twenty years for the National Garden Scheme on the second weekend in June (see ‘What’s on’ for dates).

Both gardens are managed organically, and wildlife is encouraged by providing suitable habitats, with perhaps the exception of pigeons!

ONLY guide dogs, hearing dogs and medical detection dogs are allowed in the museum and gardens. No other dogs are permitted inside the building or beyond the Courtyard.

Views of the Gardens Through the Seasons