How did Orchard Side become the Cowper & Newton Museum?

Orchard Side House, the home of William Cowper between 1768 and 1786, became the Cowper Memorial Museum, now known as the Cowper & Newton Museum, in 1900.  The building was a gift to the town of Olney following fourteen years of friendship between two local residents, united by their mutual appreciation of Cowper’s work.

Thomas Wright, a 19th century Olney schoolmaster, local historian and author, collected and enthusiastically promoted William Cowper’s work and history. He was a great fan of many English poets and writers, but William Cowper, literary star of his home town, was clearly his favourite. The school he founded in Olney was named the Cowper School in honour of his hero. Wright gave talks around the country to raise awareness of Olney’s history and William Cowper’s work, and in 1886 – a century after Cowper left Olney – published his first book on Cowper: The Town of Cowper or The Literary and Historical Associations of Olney and its Neighbourhood. William Collingridge, a successful London publisher who happened to own Orchard Side, was so impressed with the book that he wrote to Wright to praise his work. They became friends through their mutual interest in William Cowper and their enthusiasm was shared by many other Cowper fans. Wright was the founder of the Cowper Society, who corresponded, held meetings and compared their private collections.

Orchard Side was not the first Cowper museum, but it was the first permanent one. Wright’s cousin was leader of the Buckinghamshire Archaeological Society, and Wright organised a temporary Cowper museum at Etolia House in preparation for the Society’s visit. He then began to exhibit his Cowper Collection in his own home. But Wright knew this would be a temporary situation and worked tirelessly to press for a permanent site to house all Cowper collections.

Wright began to ‘commence an agitation for the establishment of a permanent museum of Cowper MSS. (manuscripts) and relics…’ He wrote a biography of William Cowper in 1892. Campaigning tirelessly through local and national letters and talks for the next 12 years, he hoped Collingridge would agree that Orchard Side should be dedicated to keeping William Cowper’s memory alive, to benefit the people of Olney and the nation itself.

Thomas Wright believed Orchard Side was Cowper’s spiritual home and destined to become a permanent venue in his honour. Cowper loved Olney as an escape from stressful city life; its peaceful and beautiful surroundings helped to preserve his fragile mental health. He wrote ecstatically of the beauty of the countryside, as detailed in his poem, The Task. His close friend and literary collaborator John Newton was curate-in-charge at the nearby church; the two were close friends and Newton visited so regularly that he paid a neighbour a guinea a year for access through the land that separated them, now known as the Guinea Orchard.

Orchard Side and the Summer House had become a tourist attraction soon after Cowper’s death in 1800. Literary pilgrims visiting throughout the 19th Century traditionally carved their names on the inner walls of the Summer House. 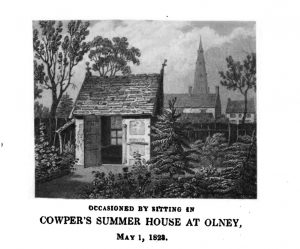 ‘Cowper, illustrated by a series of views, in, or near, the park of Weston-Underwood, Bucks. Accompanied with copious descriptions and a brief sketch of the poet’s life’ James Storer and John Greig, Engravers, 1803

‘The Rural Walks of Cowper; displayed in a series of views near Olney, Bucks: representing the scenery exemplified in his poems; with descriptive sketches, and a memoir of the poet’s life’ J & H S Storer 1822

In 1900, the centenary of William Cowper’s death, William Collingridge donated Orchard Side and its grounds to the Town. The Museum was immediately popular; Wright had successfully inspired curiosity and ‘‘A number of well-known people went down from London in the morning, but they were hopelessly lost in the enormous mass of Buckinghamshire folk who made holiday. The whole country for 20 miles around seemed to have assembled on the big Market Place. County families came in state, go-a-head folk hurried to the front in automobiles, while gigs and bicycles were beyond number.’

The original entrance into the Museum was through the door into the Hall from Market Street.  The principle exhibition rooms seem to have been the Hall, the Parlour and Cowper’s Bedroom. 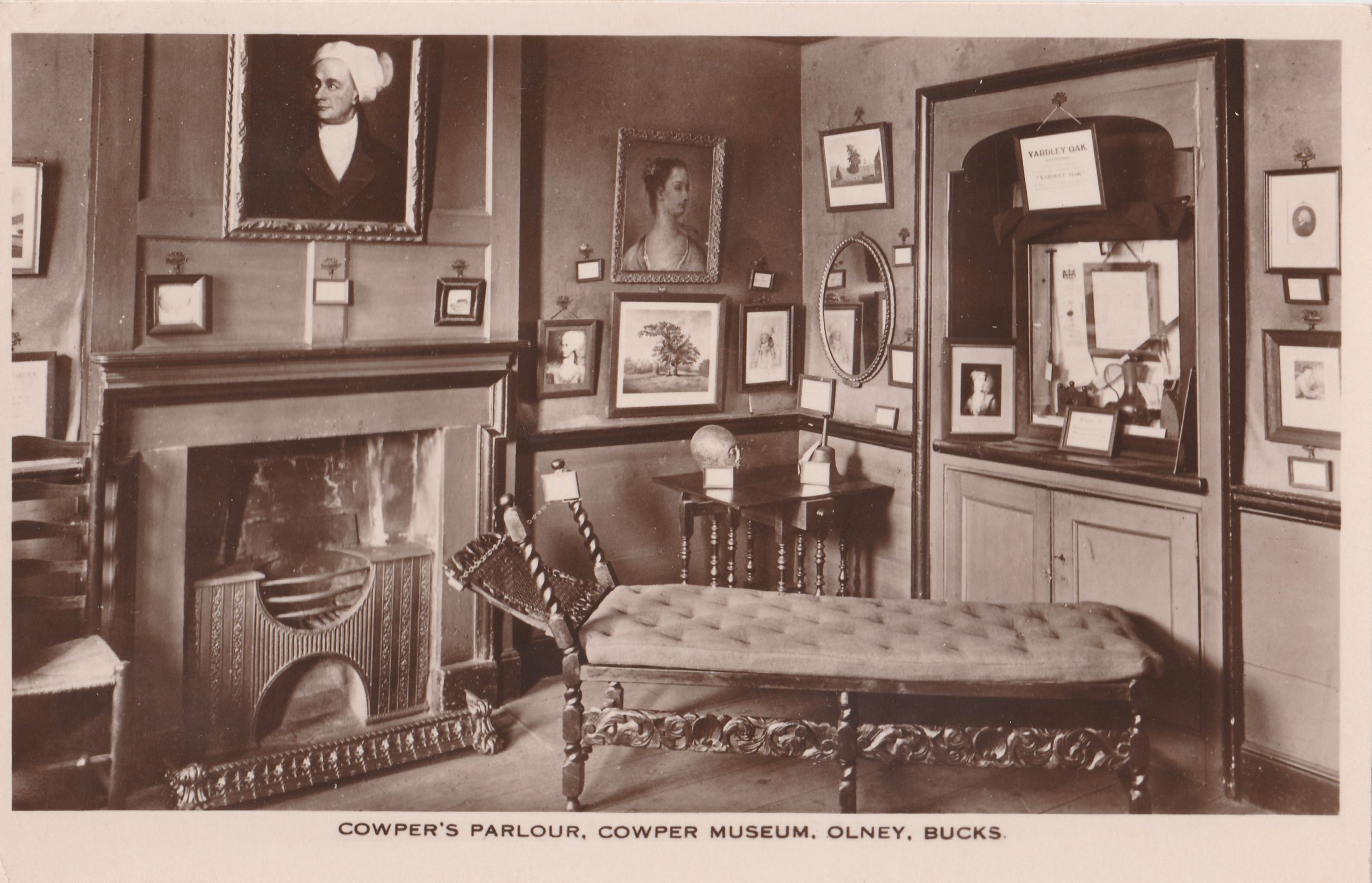 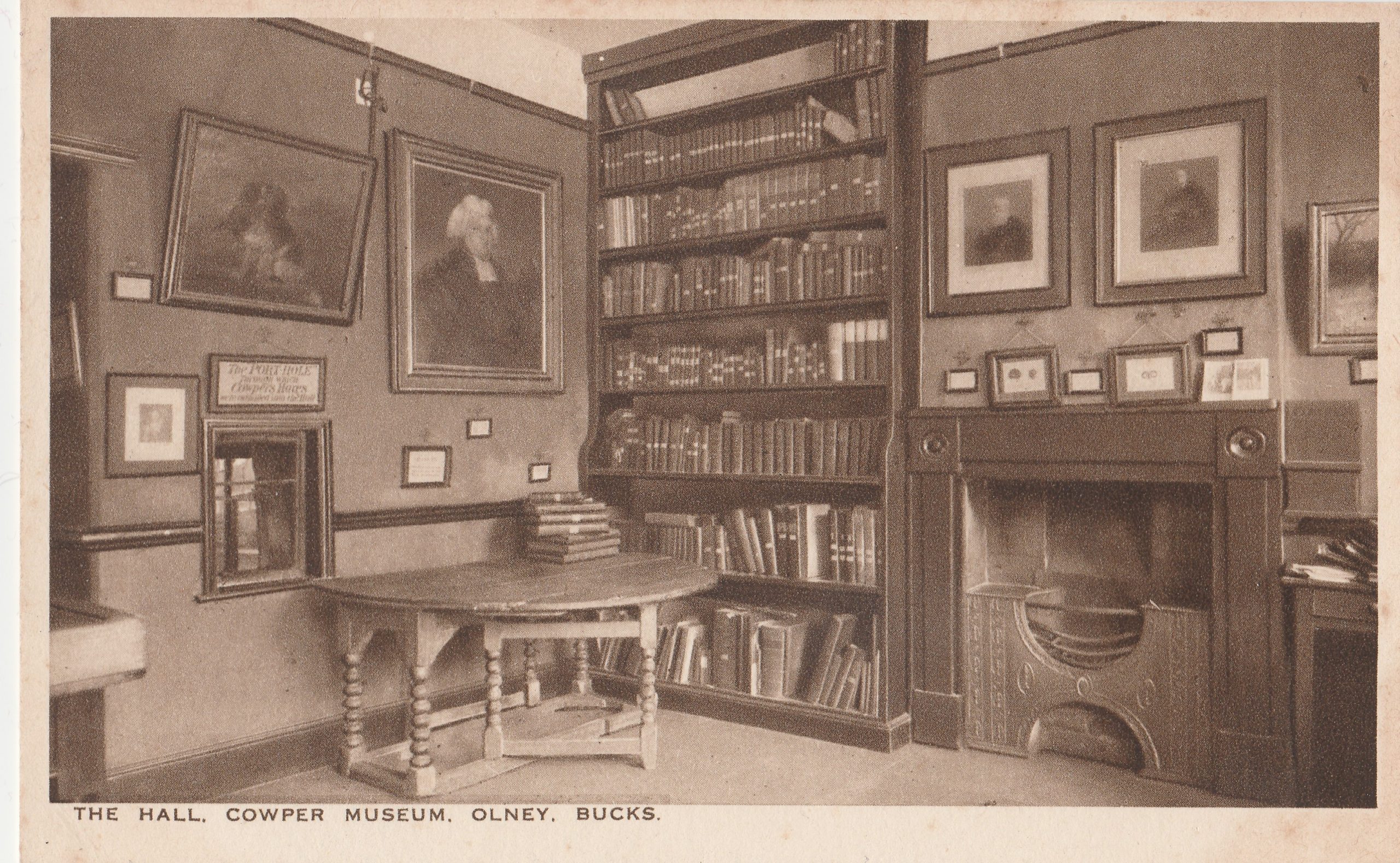 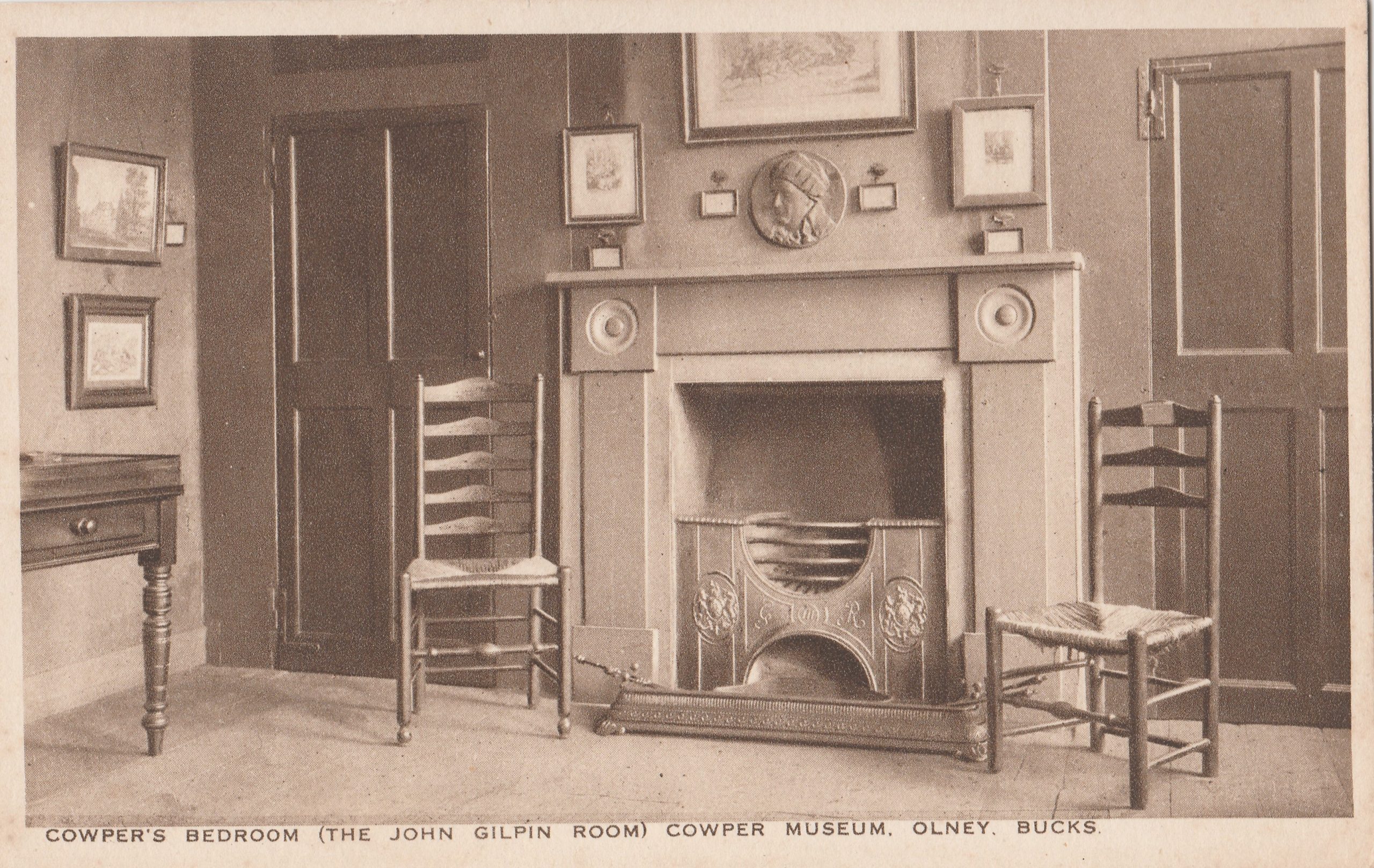 The famous Summer House was purchased in 1919, completing the Museum grounds, after a long fundraising campaign led by Wright, who was the first secretary of the Museum’s governing body.

The Museum contains a wealth of objects, initially from the many collections Wright persuaded his fellow enthusiasts to donate, then added over the years by numerous benefactors and through grants.The museum has steadily built up its collections, and now has substantial holdings of objects belonging to Cowper and Newton their circle, as well as manuscripts and books relating to their work.  There is also a Lace collection and other items illustrating the history of Olney from the earliest times to the 20th century.

In particular it has benefited in recent years from the Barham Johnson Bequest of Cowper items, a collection of fine first editions of Cowper from the library of John Sparrow, Warden of All Souls College, Oxford, and the important Cowper Johnson Archive of letters and personal possessions of the poet, secured in 2006 with grants from the Heritage Lottery Fund and the MLA/V&A Purchase Fund, and the proceeds of an Appeal.