Original words of the hymn ‘Amazing Grace’ by John Newton.

‘Amazing Grace’ was penned by the Rev John Newton during his time in Olney, Bucks, England.  ‘Amazing Grace’ was originally titled ‘Faith’s Review and Expectations’.  It was published by John in 1779 as hymn number XLI in a hymn book titled ‘The Olney Hymns’ (also stocked in this shop).

What is Amazing Grace about?

John had decided to base his sermon on 1 Chronicles 17, an ideal subject for New Year’s Day.  As with his hymns, John often used examples from his own life to help his congregation of lacemakers, farmworkers, tradespeople, young people etc understand his message. As David is encouraged to do in this passage, John talked about looking back at life and considering who you are now,  as well as looking forward to what the future might hold.

‘Through many dangers, toils and snares,

I have already come’

The verses resonate with John’s own personal history as a recalcitrant young sailor in the shipping trade & Navy, as well as his later participation in the transatlantic slave trade. They also remind us of a day that John never forgot throughout his life when on 21st March 1748 aboard a badly stormed-damaged trading ship and fearing for his life he began his journey back to his faith:

‘Amazing grace! (how sweet the sound) 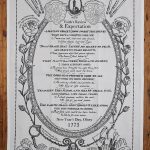