Only 2 left in stock

This watercolour has been in the Cowper and Newton Museum since it first opened in 1900 but its earlier provenance is unknown. The Great House was an E-shaped building of three stories, enlarged in the mid-17th century. It stood between Olney Mill and the  Anglican church, and belonged to the Earl of Dartmouth who allowed John Newton to use its rooms for prayer meetings and Bible study. Some of the Olney Hymns were written for the groups that met there. Even in Newton’s time the house was uninhabited. It fell into disrepair and was demolished some time before 1857.

The print is mounted ready to be framed. 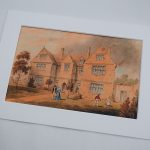 The Great House, Olney Print
£10.00
We use cookies on our website to give you the most relevant experience by remembering your preferences and repeat visits.
By clicking “Accept”, you consent to the use of ALL the cookies. However, you may visit Cookie Settings to provide controlled consent.
Cookie settingsACCEPT
Manage Cookies