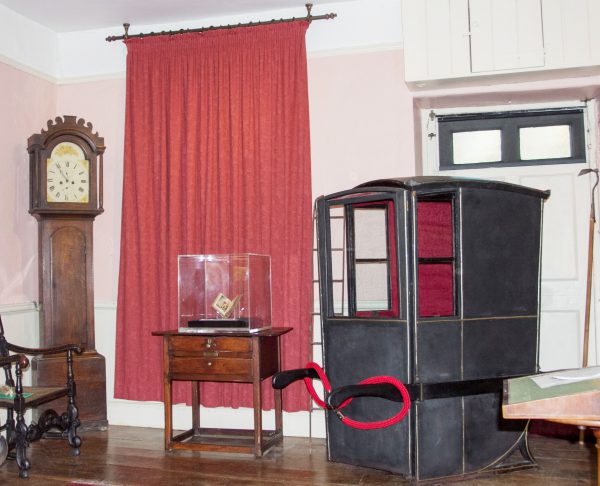 To the sound of the gentle tick and chime of the grandfather clock step into the Hall to be introduced to William and his family.  Don’t miss the secret of the hinged frame to William’s portrait by Lemuel Abbott or how his pet hares became famous.

‘I undertook the care of three (leverets), which it is necessary that I should here distinguish by the names I gave them, Puss, Tiney, and Bess. Notwithstanding the two feminine appellatives, I must inform you that they were all males.’ 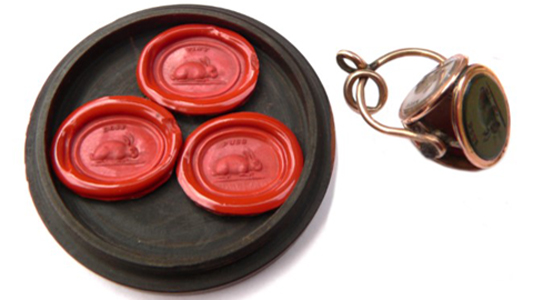 This rotating seal fob has 3 faces, each carved with the name and image of one of Cowper’s three hares. It belonged to Lady Hesketh (nee Cowper, William’s first cousin) who had been given it by Princess Elizabeth, the daughter of George III and Queen Charlotte.

.‘… as soon as you have entered the vestibule, … , you shall see on the right hand a box of my making. It is the box in which have been lodged all my hares; …

On the right hand stands a cupboard, the work of the same author; … Opposite to you stands a table, which I also made: but a merciless servant having scrubbed it until it became paralytic, it serves now but of ornament; and all my clean shoes stand underneath…’

Letter from William to his cousin, Lady Hesketh nee Cowper

Move on to The Parlour