Many visitors as they finish their tour of the Museum often miss this fascinating machine tucked away in a small alcove on the staircase which takes you back to the lobby area. This is an electric shock machine, very much of its time in the 18th century and demonstrates William Cowper’s fascination with the latest advancements in science and medicine. 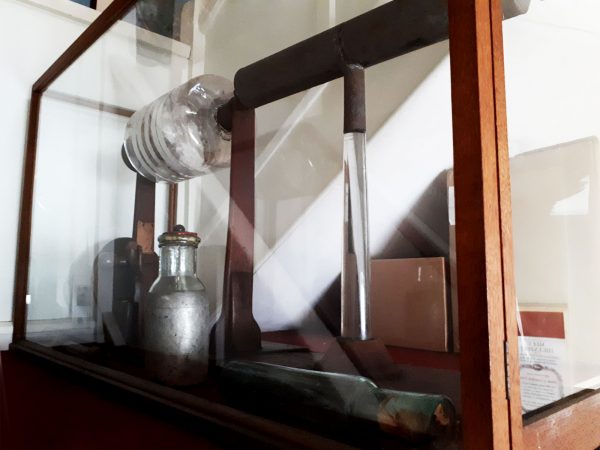 This was the Age of the Enlightenment and Cowper, being very much a polymath, was interested in the works of his contemporary Tiberius Cavallo, a physicist who invented many scientific inventions and wrote a “Treatise on the Theory and Practice of Medical Electricity” which Cowper studied and followed. Our machine looks very much like a “Cavallo Machine”. It was natural that William, a progressive thinker, should be as excited by the potential for electricity as his contemporaries such as Matthew Boulton, Josiah Wedgwood, Erasmus Darwin (Charles Darwin’s grandfather) and the US founding father Benjamin Franklin were. Electricity became the sight to see, and in which to participate, at the fashionable London salons.

Why though was Cowper so intimately interested in this machine? The answer is simple and touching. Cowper lived for many years both in Olney at Orchard side and in Weston Underwood at Weston Lodge with a widow, Mrs Mary Unwin. Our William had become friends with her son William and had moved as a lodger into Mary and her husband’s house in Huntingdon. When her husband died Mary leased a house here in Olney in order to attend John Newton’s church and William came too. The two lived together for the rest of their lives and in many respects Mary filled the yawning gap left in William’s life by the death of his mother when he was a boy.

It was when Mrs Unwin became ill after what was thought to be a secondary stroke that William borrowed the machine from a neighbour, the aptly named Mr Socket in Weston and subsequently bought it from him. Similar machines were used to ease a wide variety of ailments including paralysis, convulsions, jaundice, gallstones and even tapeworms and bad eyes – for which Georgiana Duchess of Devonshire was “shocked”. The jury is out on how successful the treatment was for these conditions. What we do know, from William’s writings, is that In 1792 Mrs Unwin was in a very poor state. Whether she had in fact had a couple of strokes or as she herself believed she was suffering from a “complex case consisting entirely of bile, spasm and rheumatism” she was unwell and the shocking machine was of “material service” in her recovery.

Mrs Unwin appears to have been unafraid of the machine and the “shocks” but as this was long before anaesthetic I think we can assume that the Georgian’s tolerance of pain was higher than our own. That said, both William and Mrs Unwin were heavily reliant on the drugs of the day and Cowper writes of the singular success of the shocking treatment saying Mrs Unwin is so much improved that “We have both left off our Narcotics. She sleeps without her paregoric (a tincture of opium) and I without Laudanum.” 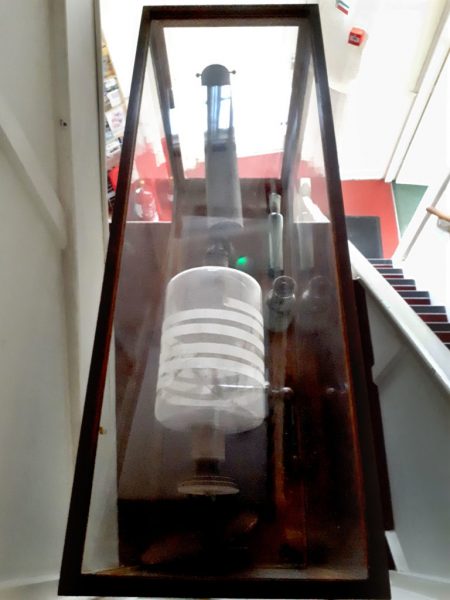 Mrs Unwin was routinely shocked by the machine for at least a year because William was still delivering daily doses to her in July 1793 writing that “I am just going to electrify Mrs Unwin, which done, I must take a short walk and dine.” It is easy to be scornful of the treatment but it is pretty clear from William’s writing that both he and the patient saw the benefits. Mrs Unwin died in 1796.

John Newton also had his own electric shock machine. In his diary he refers to trying this ‘therapy’ on William who had suffered a serious breakdown at the beginning of January.

‘A thought of the machine with respect to my dear friend struck me the other morning as we were walking together. Prevailed on him to let me make experiment of it today. But could not observe any sensible effect.’

In 2018, the Museum was also lucky enough to be given on long term loan a set of letters between John Newton and Robert Jones. Marylynn Rouse of the John Newton Project has transcribed these letters for us, and there are 2 references to an electrical machine. We quote from these letters & her additional research below.

In Liverpool John Wesley had breakfast with Newton, who was there working as Surveyor of the Tides, before he left town. Newton noted in his diary ‘I am about undertaking to keep an electrical machine for the use of the poor as I find this wonderful phenomena and has an uncommon effect in Nervous Cases and generally in all observations.’
The following day he added: ‘Today I have been almost engrossed by the Electrical Machine so that the Critica could not get forward. I had one patient AK (besides our maid servant) she has been crippled many years. Oh that I may be enabled to water the work with frequent prayer, and to strengthen it by faith.’

‘I sympathise with you in your painful bodily affliction? But O what comfort to consider – that all our concerns, even the minutest, are under the care of infinite wisdom and love. Have you tried the Electrical Machine? It would perhaps greatly relieve, if not wholly remove your complaint, especially in the paroxysm. I have a machine in the house, with which by the blessing of God I have effected several very unusual cures, in many different, and some seemingly opposite cases – and this without any expense or trouble, and with but little pain. I look upon the discovery of this wonderful apparatus, as one of the greatest outward blessings the Lord has given to the present age – as its medicinal efficacy is most remarkably conspicuous in nervous disorders, and such complaints as usually lay beyond the reach, at least beyond the influence, of the materia medica.

‘A part of my time three afternoons in the week is now devoted to the Electrical Machine. I have generally six or more patients, and hope it has been already in some measure useful. The Lord give his blessing to this and every other attempt.’

‘We have a great trial now upon us, my son Josiah’s second son by his present wife was a most lovely infant both in person and in his lively, spritely, active disposition attended with all promising indications of the sweetest temper, he at seven months old had the smallpox in the most merciful and favourable manner, and after the soreness was over he was all activity and entertaining as before, – but when his teeth began to enter the gums it put him to such exquisite pain as threw him into fits which came so frequent and sometimes so strong, that he is deprived of his understanding. He has had more than a hundred of those fits, and we have been called to see him expire, in some of them. They are to me the same as if they were my own immediate offspring, and the case affects and afflicts me much; he is now two years old, and the faculty can do nothing for him till he got all his teeth, and then they talk of electricity, and my son at Portsmouth who is one of the faculty and of great judgment tells me he hopes after electricity has been tried that God will enable him to prescribe something to the child’s advantage, and that he don’t think his case incurable. God is pleased to enable us to take the same method that he taught you to do, with respect to yourself and Mrs Newton, and we desire that you will be pleased to join us herein. God can restore him in a moment – or he can bless means.’