‘My hymn book is printed and will soon come abroad; may thy blessing accompany it, …’ 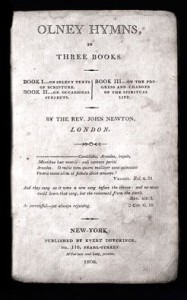 This month our volunteer Fran Parry gives some thought to the hymn book the ‘Olney Hymns’, the most famous of which “Amazing Grace” was penned by John Newton whilst curate of Saint Peter and Saint Paul church in Olney in 1773.

‘I first heard the hymn in 1971 as a pre-teen.  The Judy Collins version was an unlikely Top of the Pops act.  To be honest I was more interested in Hot Love by T Rex but nonetheless recall it having a profound impact upon me.  Listen to it, it is a fine version.

Whatever your faith, or none, one cannot help but be moved by the words of the hymn, particularly in the context of the writer’s life. John’s life at sea included being press-ganged in to service in the Royal Navy as well as becoming a slave ship captain who saw the brutality of the slave trade at first hand.  After once nearly losing his life on board the ship “The Greyhound” John not only found his faith but started his long spiritual journey which also saw him becoming a leading proponent for the abolition of slavery, mentoring and inspiring William Wilberforce and giving eye witness accounts about the iniquities of slavery to Parliament.

Newton is remembered in many ways including by  a monument in Westminster Abbey, a town named in his honour (where his slave ship docked) in Sierra Leone, and perhaps most bizarrely (but most aptly for a writer whose hymns have survived 250 years) as an inductee of the Gospel Music Hall of Fame. Amazing Grace and the Olney Hymns are surely his most potent legacy.

Amazing Grace originally laboured under the less jaunty title of “Faith’s Review and Expectation” and was one of 348 hymns in the Olney Hymn Book written by Newton and his collaborator and close friend, William Cowper.  They were prolific and at one time it was Newton’s habit to compose a hymn every week in time for the Sunday evening service.  Research suggests that Amazing Grace formed part of Newton’s New Year’s Day 1773 sermon to his Olney parishioners.  The tone and words of the hymn suggest a profound empathy with his congregation, most of whom lived in deep and unremitting poverty, scratching a living from agricultural work and lace making.  Newton’s biographer Jonathan Aitken has suggested that the hymn also sought to support his close friend William Cowper who was slipping in to a deep depression.

Newton felt undeserving and the words in his diary shortly after he arrived in Olney echo the sentiments of the hymn:

“I am a poor wretch that once wandered naked and barefoot, without a home, without a friend… treated as a dog by all around me.

He gives the impression of being a very inclusive evangelical preacher,  singing hymns and giving sermons in the church, the vicarage  and in his patron Lord Dartmouth’s Great House to a variety of congregations: “I propose to establish three meetings…One for children, another for the young and enquiring persons, and a third to be a meeting with the more experienced and judicious for prayer and conference”.  The meetings were extremely well attended and evidence of the depth of the spiritual need of his parishioners for which the hymns provided succour.

Even in Newton’s lifetime some of the hymns were being attributed to other writers and so in June 1779- 240 years ago this month – he collected 348 of them together to be published as a hymn book.  As he states in the Preface to the hymn book “the public may be assured, that the whole number were composed by two persons only”.  William wrote 67 hymns and John 281.

You can learn much more about John Newton and his collaborator William Cowper at the museum and on our website https://cowperandnewtonmuseum.org.uk The Museum also owns a significant collection of publications, including first editions of the hymnbook.  Researchers wishing to delve into these editions should contact the Museum to arrange access.

Jonathan Aitken’s biography of Newton “From Disgrace to Amazing Grace” is published by Crossway.  It is a stirring work by an author who too has found “Grace” and who clearly takes considerable inspiration from the life of John Newton.  Brian Edwards has also updated his book ‘John Newton Through Many Dangers.  These books are on sale in the Museum shop along with numerous other fascinating works about the personalities of the era and the part our town played in what was little short of an evangelical revolution.

And don’t forget to look up Judy Collins on YouTube!’