This month volunteer Fran Parry tells us more about  a TV star in our midst.

‘An apparently unprepossessing artefact, a straw work box, was taken to a filming of BBC’s Antiques Roadshow last Summer at Wrest Park. The segment was broadcast in May and we learned that the piece has a value of £4-6,000.   Provenance is apparently everything when valuing antiques and the fact that the box likely belonged to Rev John Newton increased its potential value tenfold.  At first glance it’s not an obviously interesting piece.  However, on closer inspection not only is the box a thing of some considerable beauty but it also tells a fascinating tale about the later Georgian period. 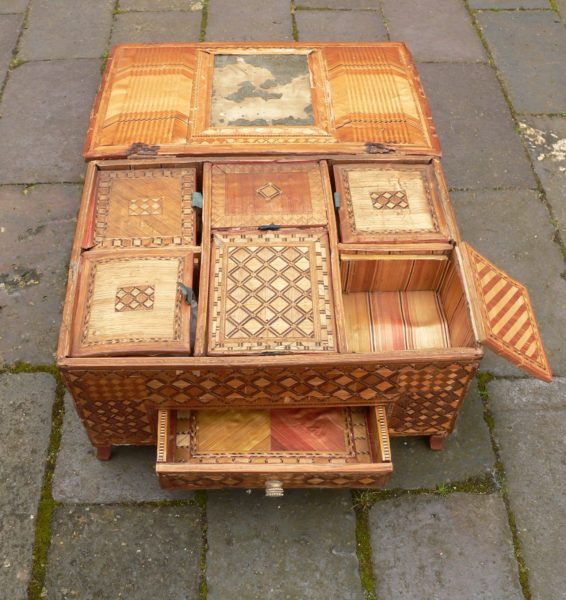 We know a little about the artisan who made the box and how Newton probably came by it. There were thousands of French prisoners in England at the height of the Napoleonic wars held in traditional prisons and on prison “hulks” – moored up ships.  Newton was an avid prison visitor  and it is likely he bought the box at one of the London prisons that he visited while evangelising or during a visit to the hulks at Portsmouth and Southampton.  Alternatively, it may have come from one of the larger prison camps such as Norman Cross near Peterborough which operated from 1797 to 1815. Napoleonic prisoner of war straw work was a highly skilled craft. Prisoners were encouraged to occupy themselves and earn some money (with which they would buy extra food and improved conditions) by applying themselves to the creation of hand-crafted items.  Creating straw marquetry was one such occupation as was scrimshaw bone-carving. All the tools and materials were readily available to the prisoners who used scrap metals, glue from boiled down animal bones and straw stalks salvaged from the local farms.

The box is of two layers and is made of cheap materials including pine wood, straw and bone. The maker utilised simple construction methods, cutting and gluing the straw that covered the box, but it is nonetheless intricately made.  This begs the question whether the craftsman brought the skill with him or learnt it in prison.  Either way we are presented with what would, in its day, have been an eye-catching piece with every surface (inside and out) made up of a large assortment of geometric patterns, all emphasised by straws that differ in colour, tone and heaviness. The appearance and method is akin to marquetry, a skilful European woodworking technique that became popular in the 17th Century. Straw versions that utilised a similar process, cutting and arranging and gluing into complicated patterns to create a smooth veneer, began to be produced in England in the !8th Century and were probably introduced from France and Holland.  The straw designs on our box are quite complex, (there are nine distinctive geometric patterns), and were clearly completed by someone with considerable skill.  The straws were frequently dyed.  In our example when you lift the lid on the box you can get an idea of what a colourful piece it was in its original state before the outside became sun-bleached.

Its not entirely clear what the box was used for.  It has several compartments and may have been used for trinkets or for gaming cards, counters  and dice. Whatever its use it has very obviously been well-used and loved in the 150 years between Newton purchasing it and it being gifted to the Museum by Newton’s family in the 1940s.  The box brings us closer to the man, hundreds of miles from home in a foreign land whiling his time away creating this lovely piece, and to John Newton, who’s eye was caught by it.’

You can read more about the intricate designs and the detailed construction of the box on the museum website: